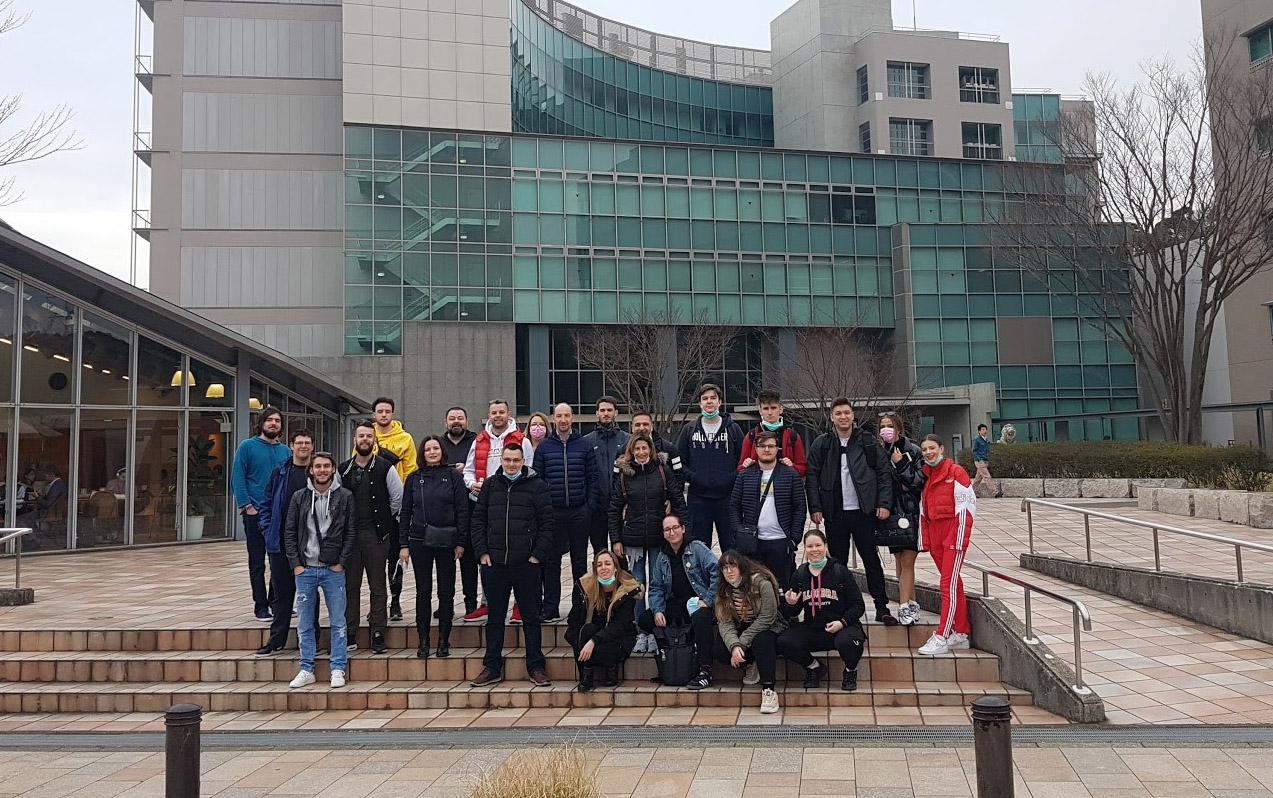 Nathan Sievers (27) is an American who a year ago decided to pack his bags and move to Croatia to study Game Development at Algebra University College.

He studied Mathematics in the States, but ever since he was a kid, he wanted to design video games. This has been his hobby since he was 10.

- Some of my first memories are of picking up a pen and paper and drawing game levels. - he says.

After high school, he changed his mind and started studying Mathematics at the University of California, Santa Cruz, only to discover a program there in which he learned to develop video games.

- That’s how I managed to earn a double degree - in mathematics, with an emphasis on programming languages and videogames. Later on, I researched colleges outside of the States where I could study Applied Mathematics and wanted to make it my fulltime career, but I realized that what I love about math is actually its applicability in video games. - says Nathan, adding that it was also important to him that his work gains visibility outside of the academic setting and that people can enjoy it.

After graduation he spent some time travelling the world and working as a freelancer. On one of his travels he came to Croatia and fell head over heels with the country.

- Aside from its natural beauties that are truly fascinating, what I really like is the attitude Croatians have to life, your culture and way of life. When I came here, I felt a certain sense of calm and I knew this is a country I could spend a part of my life in. So I looked for colleges to continue my studies to see if I really could stay - and I've found Algebra, he tells us enthusiastically.

When he was researching study programs and came upon Game Development, he was blown away by the program.

- American colleges have a good learning system and I really appreciate my first degree, but what I absolutely love here is the emphasis on applying what you’ve learned. They don't just teach theory and general principles about how things work; they show us much more and in more detail about different industry applications. - he tells us.

- I felt an opportunity opening up to live in a new place I had immensely enjoyed it the first time I visited, but I also felt that I had found a college that was a perfect fit for me. - he says.

Nathan packed his bags and moved to the other side of the world. Even though this was not a first for him, having already done it by moving to Australia, this time it was a little different as he was moving to a non-English speaking area. Nevertheless, he managed just fine.

Nathan has finished his first year of the graduate study program at Algebra, taking some of his classes online because of the coronavirus. However, he returned to California by accident.

- I planned on going on a study visit to Japan, but I didn’t travel with my colleagues because I first had to go to Los Angeles to take care of some personal things at home. Because I had a return ticket, I went back the same way, so I stopped in Los Angeles first. As Covid-19 was gaining momentum, classes were cancelled, and I ended up having to stay home. If the situation had been different, I don't know if I would have come back to the States. - he says.

However, he is very satisfied with Algebra’s online classes.

- Of course, it's easier and better when we have live classes, but I think Algebra did an amazing job. They were very well prepared and delivered classes at the highest possible level, so I am very satisfied. - he says.

Still, Nathan can't wait to come back to Croatia.

- I managed to visit some beautiful places for the short time I lived in Croatia - your coastline and the islands are truly beautiful, and I can't wait for the coronavirus to end so I can come back. The study program is really great, but it's only one of the reasons I moved; I even like the idea of staying here for a few years. That's why I hope I can pack my things and go back as soon as possible. - he says.

Before “accidentally” returning to the States, Nathan visited Japan with his colleagues and was blown away.

The first on his list of must-see things is the Miraikan Museum, because of its emphasis on technology still in development, such as robotics.

- I liked the concept of robots that assist people, making their lives easier in the aspects they are able to cover. Their use in the West is still far behind, but I believe they have a lot of potential. Also, we arrived expecting to see humanoid robots, but when you think about it, there really is no sense in the need for that sort of robot. It can look differently and still be of service to its user. – he says.

Additionally, they could see firsthand how a computer working on mechanical learning principles works and how it collects data on the subject by itself.

- At the entrance we were welcomed by a large globe lined with computer monitors displaying WiFi usage activities around the planet, temperature, times - data from around the world on screen. It was fascinating to feel how small we are in relation to everything going on in the world - says Nathan, adding that, when collecting certain data, it is more important to know how to display them visually than it is to “store data,” because humans are visual creatures and we can imagine things better on the basis of visuals than a data set or code.

Nathan believes this approach will come to the West in time.

- As for robots, I believe they will come much sooner than these data collection and analysis methods. What is questionable is the ethical aspect that has yet to be allowed to develop alongside technology, in order to ensure it doesn't get used for malicious purposes. - he explains his position.

Aside from the Miraikan, another site they visited was the Yokosuka Research Park.

- We saw how 5G works and how it can be used to ensure better WiFi coverage. The Japanese have already implemented this technology so it was definitely interesting to see how it works and how it can work and be applied in new and improved ways. What I also found fascinating was seeing the Internet of Things at the premises of NTT Docomo, the leading Japanese telecom operator, which really demonstrated the depths of different applications - from bus timetables to controlling the temperature in your apartment. Things you sometimes imagine are impossible turn out to be perfectly possible - he explains and adds how interesting it will be to see where technology will lead us.

What he found worrisome with the application of this technology was people’s privacy.

- They showed us self-driving cars, but the cars to a great extent rely on cameras. This is where the privacy issue comes in, because if you can't control where you go, somebody else can do it for you. However, I am certain that, as technology develops, so too will the ethical approach to it, because the development of one without the other makes no sense. - he says.

What he found most amazing in Japan was the practicality of life based on good technology development.

- I had never seen anything like their transport system. The way it works is downright fascinating, nothing is ever late, not even for a second. On the rare occasion a train is late, an apology is issued about a 30 seconds delay. Such great punctuality and care for people’s time is something I experienced for the first time and I didn't think it was possible. - he says.

Nathan adds that the cleanliness of the city is admirable.

- Consider how heavily populated Tokyo is. So many people ride the train every day, it should be in complete chaos. And yet, it isn't. The Japanese are so respectful of themselves, their space and each other, their overall mindset does not focus on “me” but rather on “us“. And this is why they are so advanced as a country. - he explains.

However, what left the biggest impression on him, as someone who likes to see knowledge in application, is exactly that - the application of technology in everyday life.

- In theory technology can be very good, it can even be very precisely executed in a controlled environment, but if it isn't applicable in everyday life, it's useless. What we've seen has truly impressed me because it doesn't mean just developing technology for the sake of technology, but rather for its application - making people's lives easier, and I’d even say improving the quality of life. And this is precisely why we should be doing these things - to achieve efficiency. - he concludes.